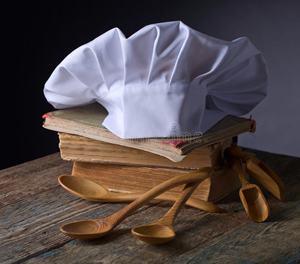 I have no idea how many cook books I have or for that matter how many cookbooks I have had. There was a time, when the big book stores existed, that Loraine and I would just go and wonder around. Leaving without a book or more was rare and in most cases there would be a cookbook as part of the selection.

Over the years I found that very few of those cookbooks really had any value. Most of the time the actual food created from the recipes in the cookbook was not half as tasty as the pictures of the food were appetizing. Many (in fact all) of those cookbooks still reside on our book shelves, mainly because I have a problem throwing away any book. I would also like to say that many were purchased when we were on food kicks. Such as cooking Mediterranean cuisine or once we went to a Greek restaurant and had to go out the next day and buy a Greek cookbook. We have also gone through the cook at home Chinese food craze. Overall we weren't at all successful other than I can now make a wicked barbecued pork that will stand-up to any you can get in a Chinese restaurant as well as a very authentic shrimp, mushroom or pork fried rice.

The chefs we consistently follow are Julia Child, Chef John and recently Greg Easter. We do like and make a few of Gordon Ramsey's recipes but many of them don't do a thing for us.

In this age of technology cookbooks have been complimented with YouTube, where hundreds if not thousands of people are producing how-to cooking videos, the vast majority need to attend basic cooking classes.

Cookbooks that we use very often:

Mastering The Art of French Cooking; Volumes 1 & 2. Anyone who has any interest in food and cooking recognizes the name Julia Child. I can still remember watching The French Chef, in black and white, on PBS. Many of her old television shows are now available on YouTube. I need say nothing more.

Cooking in Russia; Volumes 1, 2 & 3. (No these are not cookbooks for Russian Cuisine.) Greg Easter is an unusual and complex individual. He has a P.h.D. Science from the University of California. After having started out as one of the pioneers of the computer revolution in Silicon Valley, he left to follow his destiny of becoming a chef, eventually working in top restaurants on three continents. 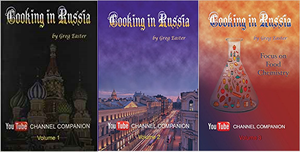 Chef John has a lot of basic food recipes that are usually quite easy to make. We have tried many and in most cases they rank from 7 to 10 on a scale of 1 to 10. He does not have any hardcopy cookbooks, but he does have a blog that he calls Food Wishes, where he shares additional information on the recipes he makes on his YouTube channel.

Greg Easter, at the time of writing this article, had 319 YouTube videos which are then detailed and expanded upon in the cookbooks. He calls the cookbooks and his YouTube channel Cooking in Russia, because he currently lives in St. Petersburg, Russia (update, he has moved to Helsinki, Finland to open a unique restaurant). He is a former restaurant owner and chef. Many of his recipes show the advanced steps to prepare a recipe if you have to have it ready in 10 to 15 minutes in a restaurant atmosphere. I find a lot of the advance preparation information great when having guests over. It means I can mingle with the guests, at least for some of the time, rather than being stuck in the kitchen. His stocks and gravies are unbelievable.

I have borrowed a few of Gordon Ramsay's cookbooks from our local public library and must say that overall I haven't been overly impressed. Now let's be clear, it's the cookbooks that don't impress me, not Gordon Ramsay. I do enjoy, for the most part, watching his YouTube cooking videos. There are a few receipts that he does that we have quite often.

Cookbooks that we use now and then:

Greece: The Cookbook This cookbook contains hundreds of traditional recipes from all over Greece.

Larousse On Cooking: This cookbook was originally written in French and then translated into English. Although it has a number of French recipes it has a number of nice, basic, easy to prepare dinners that are a cut above mundane.