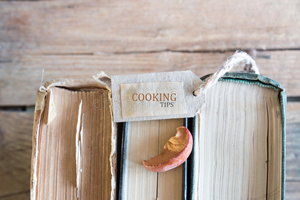 We have been foodies and amateur cooks for more years than we care to remember, but over that time we have learned a lot of things about food and cooking that we would like to share with you, our dinner guests. There is no order to this list of what we are calling cooking tips and we will be continually adding items that come to mind to the top of the list. We do apologize if we have the same item twice (or more) we're old and sometimes we forget what we have said and repeat ourselves. Which reminds me of a joke!

An elderly couple go to the doctor and tell him that they are having trouble remembering things. The doctor tells them that it is part of aging and they shouldn't worry, but to avoid frustration and stress they should learn to write things down.

That evening the couple are sitting watching television when the wife says to the husband, "I would like an ice cream sundae". She continues, "I would like a scoop of chocolate, a scoop of vanilla, whipped cream, caramel sauce and a cherry". She then says, "remember what the doctor said you should write this down". He says, "it's not necessary, it is a simple request, I'll remember". Off he goes to the kitchen. About 15 minutes later he returns with a plate of fried eggs, bacon and home fries. She looks at the plate and then at her husband and says; "I told you to write it down, you forgot the toast!"

The joke may not have put you on the floor in gut pain, but it is our first important cooking tip. If you are modifying or creating a recipe, write it down, in a note book, not on a scrap piece of paper, exactly what you have done, including cooking times. Otherwise, if it turns out to be an exceptional dish you won't remember what you did in order to recreate it. Over the years there have been a number of times when one of us has cooked something really good and when asked if it can be recreated our eyes kind of role, because nothing that we did was written down.

Out of Cake Flour?

When a recipe calls for white wine replace it with vermouth. Vermouth is an aromatized, fortified wine flavored with various botanicals (roots, barks, flowers, seeds, herbs, and spices). It's also relatively inexpensive. Vermouth will remain good for at least 6 months in the refrigerator, some people say a year. We don't buy large bottles so ours is never in the refrigerator much longer than a few weeks.

We haven't found a good substitute for red wine, but we're working on it!

Baking Soda as a Cleaner

So many recipes, especially soups and sauces, depend on a rich deep flavored stock as the backbone of the dish, while others use stock as the primary flavor enhancer. We used to put great emphasis on making our own stocks. After all, what is the sense of choosing the best meats and vegetables and then cooking them with a low quality and/or chemically enhanced canned stock. The use of bouillon (the French word for broth) cubes was definitely out as the number one ingredient is usually salt.

We are very lucky as our butcher makes his own chicken, (turkey at thanksgiving and Christmas), beef and veal stock. While our fish monger makes an excellent fish stock (we do make our own shrimp stock). That being said, if we are making a soup that requires a high quality stock such as a chicken noodle soup or French onion soup we still make our own.