Welcome To Our Favorite Chinese Recipes! 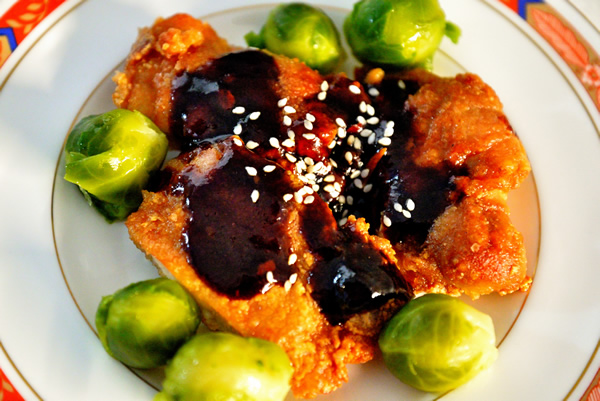 This recipe uses a new ingredient for us; sweet chili sauce. For those of you who aren't into "hot" foods this sweet chili sauce is the perfect answer for some chili flavor without the accompanying mouth burning heat.

The key to this recipe is the sweet chili plum sauce! In this recipe we are using the sauce over some boneless chicken thighs, however, the sauce can be used with chicken, duck and pork. As of posting this recipe we haven't tried the sauce on beef or fish, but I'm quite confident that we will.

Other than making Chinese fried rice and barbecued pork this was our first real foray into North American style Chinese food. We had been very pleased with one of our local Chinese takeaway restaurants, but, about 18 months ago they sold the business and the new management changed the quality and flavorings used to prepare the dishes. Since then we have tried numerous other Chinese takeaway restaurants but we were unable to find one that made the dishes to our liking.

After a lot of searching on the Internet including YouTube we decided to modify and combine a number of Cantonese Chow Mein recipes. We expected that we would have to refine the recipe before it would be a great dish, however to our surprise it was perfect and we wouldn't change anything. As far as we are concerned it is the best Cantonese Chow Mein meal we have ever had! 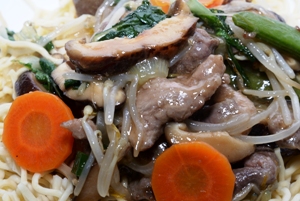 Every now and then you make a recipe and are surprised by the outcome. That's how we felt the first time we made this dish. Although this Chicken with Chinese Black Mushroom recipe only has two primary ingredients it delivers an outstanding amount of flavour.

Chinese black mushrooms are better known as shiitake mushrooms. They are available fresh and dried and for this recipe it is important that you use the dried version that you have rehydrated as the flavour is much more intense.

We served it on brown basmati rice but it would probably work just as well over white rice or Chinese noodles. 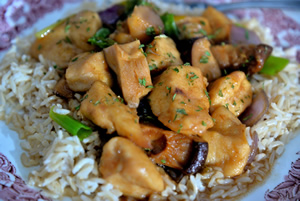 As Loraine said after the first time we made this; "this is definitely a keeper!". This recipe provides an assortment of ingredients with different textures and flavours layered on top of each other to create a superior taste experience.

This the first recipe that we have made that called for wood ear or as they are often called black fungus mushrooms. They are a mild mushroom that seem to be able to absorb the flavours that they are cooked with. We purchased them dried and then rehydrated what we needed. 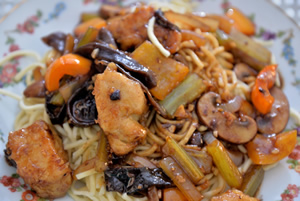 The flavor of this barbecued pork is truly delicious and if you are the one assigned to slicing it after it's cooked it is very difficult not to start nibbling on it while you slice (just to make sure that it tastes okay to serve)!

Chinese barbecued pork is a dish unto itself, but it is also a very important part of a number of other Chinese food recipes. We use it in our Chinese Barbecued Pork Fried Rice, Chinese Wonton Soup and sometimes we use in our Cantonese Chow Mein rather than using a stir-fried pork.

It is extremely versatile. The barbecued pork can be served hot or at room temperature and I find it makes for a great snack, rather than nibbling on potato chips or other packaged snack foods. 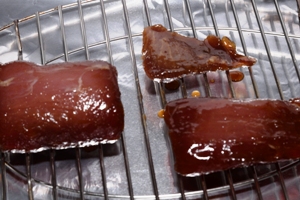 Do not confuse this fried rice recipe with anything that you have ever had before!

The basic fried rice recipe comes from a Chinese "Master Chef" who, at the time, was working at one of the best Chinese restaurants in Japan. It is different from what one might consider to be a standard North American fried rice recipe in three areas. The first is that it uses freshly cooked rice, that has been allowed to sit for a few minutes, rather than day old cold rice. Second, the egg is not fried separately and then added to the fried rice, rather the raw egg is mixed into the rice before it is stir-fried. This keeps the grains of rice from clumping together when they are stir-fried. The third point is that the egg coated rice is stir-fried without the use of any oil. 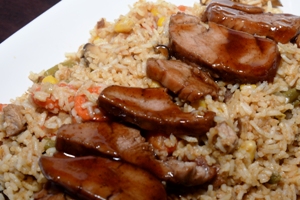 There are many recipes for Chinese chicken broth and the only variables are the cooking time and amount of water. 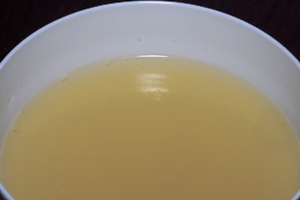 This is a total meal in a bowl. Chicken, noodles, vegis and loads of flavor. What more can you ask for.

This Chinese chicken noodle soup is quite different in flavour from the western style chicken soup, primarily because the chicken is marinated, the inclusion of ginger, the taste of the dried black mushrooms and the scallions.

The noodles make this soup very filling but if you want you can increase the amount of chicken used. 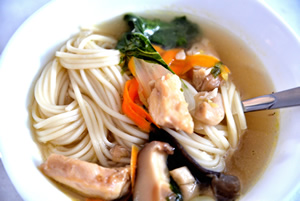 This was our first attempt at a Chinese chicken and pineapple stir fry and it was quite good. We used what we had learned when we made the Cantonese Chow Mein a few weeks ago. 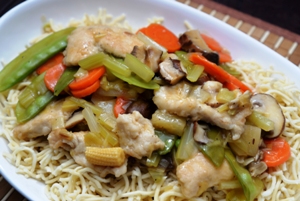 The base for almost all Chinese dumpling sauces are equal parts Chinese soy sauce and rice vinegar. To that some individuals will add small amounts of other ingredients so that they can call it their very own dumpling sauce creation. These additions can include; chopped garlic, ginger, cilantro, honey, chili sauce, chili oil, sesame oil and white pepper. Others will use Chinkiang vinegar, as a substitute for the basic rice vinegar. Chinkiang is a dark complex vinegar made of glutinous rice and malt. Still others may add sugar, combinations of dark and light soy sauce, chicken stock, green onion. 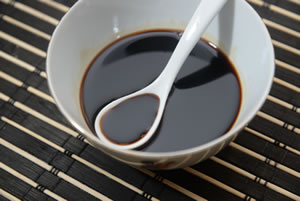 What makes this breaded chicken cutlet different from all the others? Well, in the first place the chicken is marinated before it is breaded and in the second place corn starch is substituted for all purpose flour and third a small amount of baking soda is added to the marinade. 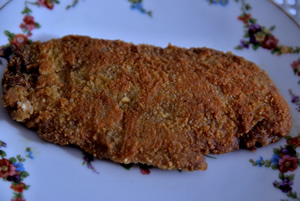 In our quest to make better tasting than a restaurant Chinese food, we have honed this recipe for Chinese pork loin chops and broccoli.

It is a light meal served on its own and could be a much more substantial meal if steamed or fried rice was added as a side.

It is quite amazing how much flavor is added to the meal with the addition of the three sliced Chinese black mushrooms. I can't think of anything that could be used as a substitute. We get them from our local Chinese supermarket. 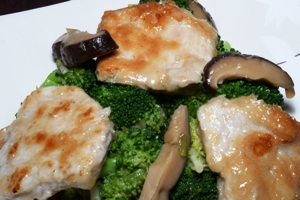 Many years ago, when Loraine and I traveled a lot, we had pork chops in a Chinese restaurant in Los Angeles, CA. that were somewhat unique and extremely good. Of course the next time we were in L.A., we went to the restaurant only to find that it was under new management and the pork chops weren't even on the menu anymore.

Since then we have tried a lot of Chinese pork chops but none matched the pork chops from that original L.A. Chinese restaurant. So, a few years ago we started experimenting to see if we could recreate the pork chop recipe that we loved so much. 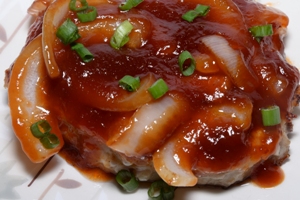 If you are a shrimp fan then this is a recipe that you should consider giving a try. Loraine and I really enjoy the combination of flavours that are within the marinade, which is also used when cooking the shrimp.

The picture shows the cooked garlic honey shrimps on a bed of spinach. In fact the shrimps and the sauce work very well on Chinese noodles, rice, mashed potatoes or mashed cauliflower. 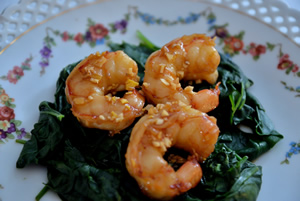 There are hundreds of recipes for Moo Goo Gai Pan; Chinese chicken and mushrooms. It's a very simple recipe and easy to make. However, after trying three, we weren't overly impressed with the flavour of any of them. The flavour wasn't bad it was just rather bland.

Loraine and I decided to combine the best features of each of the three and add our own enhancements to come up with what we think is the very best Moo Goo Gai Pan recipe and it's still very easy to make. 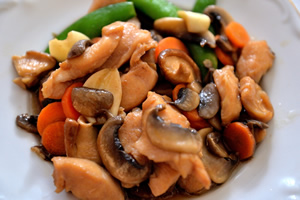 Orange Chicken On A Bed Of Brown Basmati Rice.

Many years ago Loraine and I lived in Port Charlotte, FL. We found a small, independent, Chinese takeout that made some of the best Chinese food we have ever had. One of the items that we craved was their orange chicken. 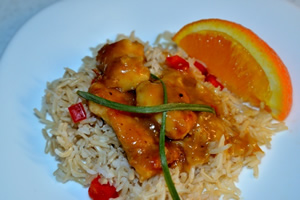 As we get older we seem to be leaning more and more towards homemade Chinese food. I think that it's the layered flavour combinations in Chinese food that make all the difference. Plus, overall Chinese food is easy to make.

This pork and green bean stir fry is the first time we have used black bean garlic sauce. I would describe the flavour, but I can't, but it did seem to add to the overall recipe, We will definitely be using it again. 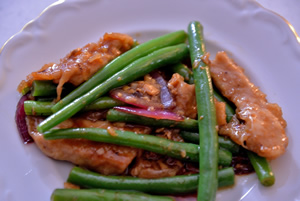 This is a simple dish loaded with lots of flavor. We use wild Argentinean shrimp. They are naturally pink in color, very flavorful and easy to devein, although the brand we purchase is deveined and the shell is split along the back of the shrimp making it simple to remove the shell. We freeze the shells for our shrimp stock.

We use brown, Indian grown basmati rice, it is healthier than white rice and we like the flavor it imparts to any recipe we use it in. However, if your preference is for white rice it can be easily substituted. If you use white rice it is best if the rice is cooked the day before and refrigerated until required for this recipe. 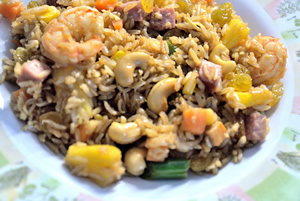 Chinese soups are generally very subtle in flavor. This starts with the chicken broth which is one of the simplest broths ever made and when completed has only the small flavor and nose of a chicken, it is only after you choose the soup you are making and add some seasoning, especially salt, does the chicken broth come to life, yet it is still very subtle in its overall flavor. 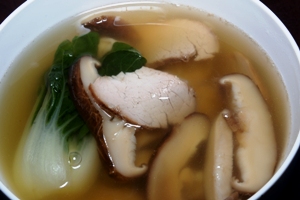