Welcome To Our Favorite Side Recipes! 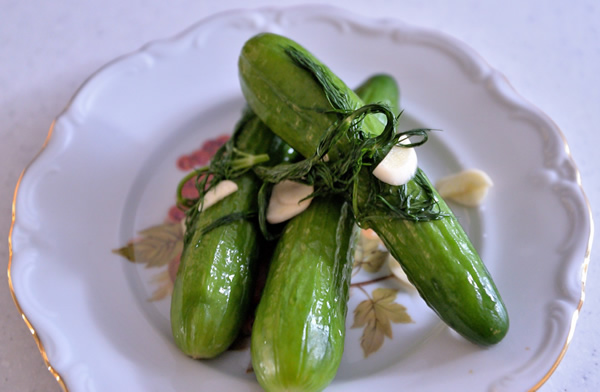 Many years ago in Ontario we could purchase unbelievable half sour dill pickles made by Strubs. Then the Strubs company was bought and half sour pickles disappeared from supermarkets as the new owners of Strubs discontinued them!

If you were lucky, you could still find half sour pickles at some delicatessens, but they weren't available in jars to take home.

Thanks to the Internet, and to my surprise, you can make your own half sour pickles, as good as Strubs ever made, in your own home in a matter of 4 days.

These candied sweet potatoes are always part of our Thanksgiving dinner, whether we are on our own or have guests. I learned how to make this dish, as a small child, while helping my mother with the cooking at Thanksgiving.

Now Mom wasn't a great cook but she did have a couple of winning dishes and this is definitely one of them. They are very simple and easy to make but more importantly, as Tony the Tiger would say, they taste great!

Plus, they are sweet, so how can they not be good? 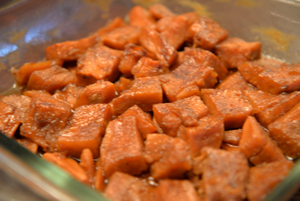 A double baked potato is one of the most versatile recipes to have available in your cooking arsenal. Why? You might ask. Well there are two answers.

First the double baked potato can be used as a side dish or it can be used as a meal unto itself and it is a great side dish when you are entertaining guests (it can be partially prepared ahead of time and it needs little hand holding in its final preparation).

Secondarily, the ingredients you use can vary dramatically. In many cases the double baked potato is a great spot to use up left over herbs and allows you to express your creativity. 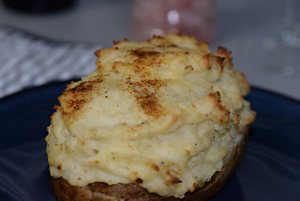 Just recently Loraine and I discovered the excellent natural flavor of steamed* fresh leeks. Although we had used leeks in soups and other dishes as a replacement or to augment onions, we had never actually had them as a vegetable side dish.

*Note: I call the cooking method steamed, but I'm not sure that steamed is technically correct. The leeks are not boiled because they are not completely immersed in water, but some of the sliced leeks are in the buttered water. 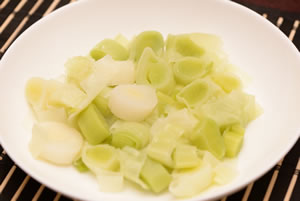 We think that rather than eating them as standalone muffins they would probably be better with an entree such as chili or maybe even a stew. 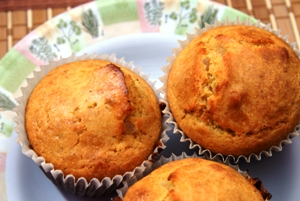 Potatoes Earl is my combined version of Potatoes Anna and Cottage Potatoes. I use it as a bed for meat or chicken on a plate. The potato bed that I create is approximately 7" in diameter and contains two layers of potatoes.

On their own, in our opinion, they make an excellent alternative to French fries and I have been caught taste testing far more than necessary while cooking! 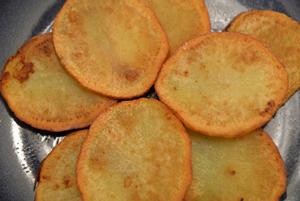 If you enjoy French fries but don't want to deep fry, then you are facing the same problem we have. Loraine after a lot of trial and error has created a method of cooking potatoes in the oven that taste like French fries, I kid you not!

What actually happens is that the potatoes fry in the small amount of olive oil that is used to coat them.

We do sprinkle some Italian spice blend seasoning on them, prior to placing them in the oven, which probably goes against all of the rules of French fry lovers, but we prefer that to the standard French fry seasoning of adding a ton of salt. 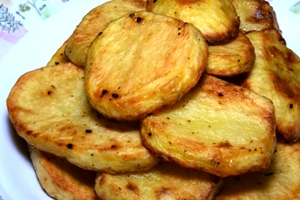 Whenever I serve my stuffing I get good to great reviews and guests seem to take second helpings which usually signifies satisfaction (or they haven't eaten in a week). The interesting thing is; I don't have a recipe for it and because of that I never make it the same twice!

The backbone of the stuffing is golden raisins and garlic and butter croutons (a PC product). As well, there is always ground sage, salt, pepper, onion or shallot and chicken broth. There could be other types of dried fruit such as apricots, apples, cranberries and/or currants. There may be some garlic, mushrooms, carrots and/or celery and once I put some spinach in because it was in the refrigerator and if I didn't use it, it would end up in the trash can. Just for interest sake, I love spinach, but it did nothing for the stuffing. 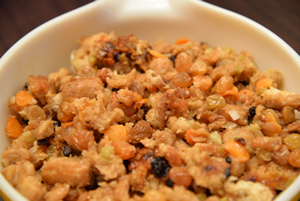 This is a quick and easy to make side dish that goes great with basic roasted chicken, pork, beef and veal. It is important to the overall flavor of the dish that the red pepper is firm yet ripe. Although you can use almost any kind of onion in this recipe, a sweet onion seems to provide the best for texture and flavor.

This recipe can easily be scaled up if you need a side dish for guests or a larger family.

The dish also reheats well in a microwave. It is best to cover the dish with a paper towel rather than plastic wrap as you don't want the red pepper and onions to steam. 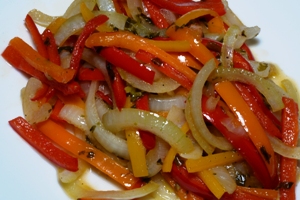